The Commissioner Prof. Dr. Máté Szabó launched a new working method and a way of thinking after his election in September 2007. He examines every year topics which are especially important for society and the enforcement of the rule of law and have a particular significance from the point of view of rights and freedoms.

Within these defined fields, he initiates special projects which have particular focus and consideration within the Ombudsman's office (initiating particular inquiries, etc), in the media and the public presentation of the Commissioner. Since there is no independent parliamentary institution for the protection of the rights of children, the Commissioner operates during his mandate also as an Ombudsperson for children's rights. The commissioner initiates an annual children's rights project that focuses on a specific subject each year.  Another important task of the ombudsman is to protect the rights of persons belonging to the most vulnerable groups of society and secure their right to dignity. For this reason the ombudsman inquired into the situation of one or some of these groups or focused on the constitutional problems concerning certain life situations each year.

In 2008, besides raising awareness concerning children's rights the Office concentrated on the right to life and dignity of homeless people and the right to assembly. In 2009 we focused on violence against children, rights of persons with disabilities, transport and the right to strike. In 2010 the main topics of our projects were the role of the family, dignity in old age and financial rights in the crisis. In 2011 our projects focused on the rights of patients, child healthcare, disaster management, in 2012 on child friendly justice, problems related to the basic rights of the losers of the crisis, the dignity of labour and the situation of fundamental rights in penitentiary institutions.

Further details can be found in the booklet titled: Projects and Publications of the Office of the Commissioner for Fundamental Rights  2008 – 2012. 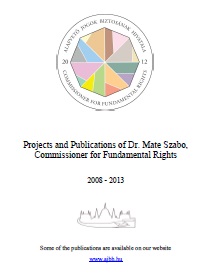