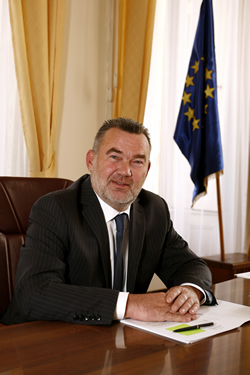 He graduated from the Faculty of Law and Political Sciences (ÁJK) of Eötvös Loránd University (ELTE) in 1982.

He has been teaching at the Department of Civil Law of the ÁJK since 1982, and he has been member of the Faculty Council since 1990. In 1995 he was awarded the Trefort Ágoston Commemorative Medal by the University.

In 1992 he was elected member of the Council of Copyright Experts.

In 1992 he became member of the Environmental Cabinet of FIDESZ, in 1996 he was elected member of the Complaints Committee of the National Radio and Television Council (ORTT).

He has been teaching at the Deák Ferenc Faculty of Law and Political Sciences of Széchenyi István University of Győr.

Between 1988 and 2002, in the capacity of Government Commissioner, he was in charge of coordinating governmental activities aimed at the implementation of the decision handed down by the International Court of Justice in the Hague on the matter of the Gabčíkovo–Nagymaros Dams.

Since 2008 he has been Director of the Institute of Post-graduate Legal Studies of ELTE.

On 15 June 2010 he was appointed Ministerial Commissioner in charge of the preparation of the new Civil Code of Hungary – his assignment was completed on 19 January 2013.

Since December 2012 he has been the head of the Hungarian delegation at the Hungarian–Slovakian talks on the Gabčíkovo–Nagymaros Dams.

On 20 January he was appointed Ministerial Commissioner of the Ministry of Justice and Public Administration in charge of the sustainable utilization of natural resources divided by state borders.

On 16 September 2013 he was elected Commissioner for Fundamental Rights by the Hungarian Parliament. He started his 6‑year term on 25 September 2013.